Looking at the Darker side of Decluttering

(and who is Marie Kondo?)

Next
Looking at the Darker side of Decluttering (and who is Marie Kondo?)

Marie Kondo is a tidying expert, bestselling author and star of Netflix’s hit show, “Tidying Up With Marie Kondo.” 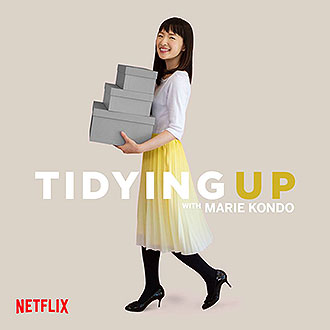 She is also the founder of KonMari Media, Inc. She was listed as one of Time Magazine’s 100 most influential people in 2015.

“Enchanted with organizing since her childhood, Marie began her tidying consultant business as a 19-year-old university student in Tokyo. Today, Marie is a renowned tidying expert helping people around the world to transform their cluttered homes into spaces of serenity and inspiration.

In her #1 New York Times bestselling book, “The Life-Changing Magic of Tidying Up,” Marie took tidying to a whole new level, teaching that if you properly simplify and organize your home once, you’ll never have to do it again.

Marie has been featured on more than fifty major Japanese television and radio programs as well as in Time Magazine, The New York Times, The Wall Street Journal, The London Times, Vogue Magazine, the Ellen Show, the Rachael Ray Show and many more”’

Marie Kondo, and many others, are responding to the tsunami of stuff we have in our homes. We live in a consumer society that is full of companies that have spent years figuring out how to get you to spend money on “stuff”.  They make the experience of buying stuff so pleasant that “shopping” has now become a leisure activity for the majority of us at some point. But things are starting to change as many have found that having a house full of “stuff” doesn’t lead to greater satisfaction, happiness or well-being, in fact some have found the opposite – it’s a burden and in some cases – a huge burden.

A house full of stuff can be very depressing, can sap one’s spirits and is literally exhausting.

Once you’ve accumulated a certain amount of stuff, it starts to own you rather than the other way around. It can become overwhelming to think about sorting through it and deciding what stays and what goes. Any form of clutter is a legitimate source of ongoing stress as cluttered environments have an impact on the brain’s ability to focus and affect working memory – this could explain why some of us work so much better after we have tidied a desk, a room or the whole house!

When clutter gets way out of control it’s called Compulsive Hoarding. 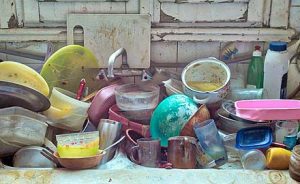 This is the name given to a behavioural pattern characterized by excessive acquisition of and an inability or unwillingness to discard large quantities of objects – most which would be considered worthless such as newspapers, broken items, trash and things that may be useful “one day”.  Hoarding can prevent typical uses of spaces within a house, enough so that it can limit activities such as cooking, cleaning, moving through the house, and even sleeping. Compulsive hoarders may be aware of their irrational behaviour, but the emotional attachment to the hoarded objects far exceeds the motive to discard the items.  Genuine psychological pain can be experienced when people are asked to address their clutter and part with possessions – in compulsive hoarders, it’s akin to the pain of drug withdrawal.

Marie Kondo and her methods are not about making us feel bad about our messes and this is a huge part of her appeal, she hits at the basic truth that no one can learn our lessons for us, but she doesn’t challenge us to look beyond the clutter to underpinning patterns that may be creating these cluttered situations.

Discussing how to get rid of your stuff answers only the what, but not the why. Decluttering is not the end result—it is merely the first step. When you get rid of the vast majority of your possessions, you’re forced to confront your darker side:

These are difficult questions with no easy answers, but these questions are far more important than just ditching your material possessions: if you don’t answer them carefully, rigorously even, then that house you just decluttered will be brimming with new purchases not long from now.

Mindful Shopping – it can help!

Next time you go shopping, here are some questions to ask yourself  – and answer them honestly! The end result will hopefully mean fewer and wiser purchases.

If you don’t have any immediate use for it, you probably never will.   –  Don’t buy it

Ask yourself “is this going to make my life noticeably better?”  No?   –  Don’t buy it

Ask yourself “Am I going to wear this all the time or will I use it constantly?  No?   –  Don’t buy it

Is it a mere bargain, or something nice?  Is that a good enough reason to buy it? No?  –  Don’t buy it

Are books any different?  Many would say yes within reason (myself included!)

How do I spend my money then?

If you want to spend money on some kind of treat –  how about something like an activity, an outing, a trip to the beach, a forest walk, a visit to a park with your children, or how about organising a gathering of friends/neighbours or a visit to family. Create memories with your family, be there for your children, your elders, your neighbours and friends and focus on what’s really real – building heart based connections with the loved ones in your life.

Information provided on the Light Transitions website is general in nature only and is not intended as legal, financial or any other form of advice.

About the Author: Alison Eaton

Combined with great organisational and personal skills developed over years both as an employee and a business owner Alison is now being drawn to focus on being of service to the aging in our community as they navigate their path through life towards death.